rabin huissen's works result from meticulous rituals, where the artist follows a script with instructions he sets for himself and others, in order to trace movements in time/   the scripts work as a frame on a structural level, where he is the initiator and often "performer" but where he also invites others to take part in/   these are the ingredients of huissen's work: the script, which sets up a situation, human contact and the natural conditions which allow for the experience to happen/   a diverse spectrum of results appear, from small to human scale blue prints, letters and postcards he exchanges with others, cut outs which trace his wondering arounds in the city, series of photos and sculptural objects/

the blueprints are evidences of an intimate body experience, which reflect on a personal encounter based on traveling out of daily life, undressed from social roles or masks/   at the same time this event was occurring, on that precise point in time, something else was happening to someone else and the work moderates and connects this simultaneity/   by preserving the energy of the moment in that object, the artist's history links to other's peoples history/   in this sense, his body is used as a tool for a correspondence on a meta level, which embodies the wish for completeness and the aspiration for wholeness/   he inscribes it on paper, previously prepared with photo emulsion which reacts to light/   time is the invisible agent that allows for the reaction to take place and finally the instant is registered/   natural conditions such as the sun, the wind, the temperature, sand, dust and water interfere with the process/   these conserved moments are then collected and archived in boxes, as a closure of the process/   however, this closure is temporary, as they are later on brought to the white box context, claiming the museum's function of preserving but also displaying history. The boxes are exhibited in cabinets and on tables, as tridimensional timelines, varying in its dimensions, although the material is always the same, presented as a physical landscape of a memory database; a representation of time under the fragments of memories/

the work carefully articulates a relation between private and public; keeping and sharing secrets/   the white boxes that lay in a cabinet or on a table, waiting to be opened, until the work is finally activated by the viewer, present themselves as a gift that has been prepared by the artist under the form of a secret/   or in his letters and postcards, where the artist asks for a favour which conveys a relation with the other, built upon levels of care and trust/   this favour is actually a set of instructions to be followed by the other, which were thought through based on the person's personality and relation with the artist/   by following the instructions, the other person is actually finalizing the work without being conscious of it/

even within huissen's two-dimensional works we have the perception of a sculptural object rather than an image, in the sense that they evoke something through its absence/   his paper cut-out collages, which re- enact and recount his journeys through urban environments are spectral images of presence, such as the traveling diaries and notations/

huissen's work comes from a conceptual basis, very precise in defining its own parameters and also in terms of material and composition - where each part of the work is designed and made by himself - which makes it very unique/   yet, they are also very physical and organic, they map inner feelings and reveal physical reactions through an echo of abstractions/   his work is based on the idea that facts per se are not interesting, they only gain meaning when mediated by humans and with the interference of external conditions, which bring it from potency into being/

rabin huissen (rotterdam, nl) is a conceptual artist based in rotterdam/ 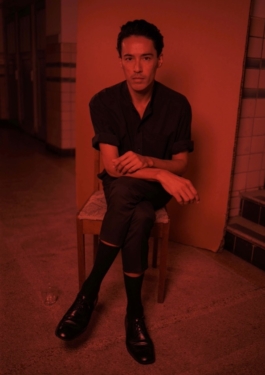