made for the entrance space of an art gallery, this oversized hand both greets hello and bids farewell to whoever passes through the building/   initially part of a series of a pair of hands and feet, the works marked the beginning of a collaborative relationship between the artist and the gallery/   however, as the relationship with the gallery started to break down, the artist chose to remove the other parts of the work, breaking the body down and leaving just the hand to symbolise the feeling of incompleteness that the fracture caused/   the hand was due to be shown in a follow up exhibition which was later cancelled due to unforeseen and uncomfortable circumstances/   later finished in the artist’s studio as an act of healing, the hand was painted red on the date the original exhibition was due to be open/   it now stands as a symbol of one's own right to set boundaries, simultaneously highlighting the strength of protest and the pain of disconnection/ 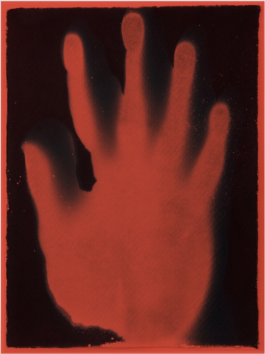